Home of Angels Aware!, Back at the Creekbank, Fish Tales, We Like Sheep & Preschool Praise'ntations! 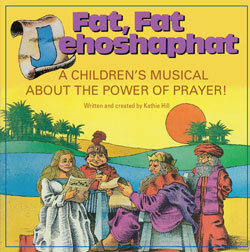 Based on the story of Jehoshaphat’s prayerful and “praiseful” response to attacking armies, Fat, Fat Jehoshaphat teaches kids the importance of prayer when faced with any problem. 2 Chronicles 19 & 20 introduces this good king who turned his people back to the Lord, then kept them in the faith when disaster loomed. Through prayer and fasting, Jehoshaphat was led to send his choir into battle ahead of his army, then all returned to the temple to praise God for their stunning victory. Whatever problems your children face, this musical trains them to respond with prayer and praise!

I saw this as a production and it was AWESOME! The music is upbeat and sends a POWERFUL message about PRAYER. I bought several CDs so I would have them for my grandchildren..that will be PRICELESS!!
Shirlee State — Sulphur Springs, TX

Kathie’s Note: I love this musical and its songs are some of the best I've been a part of creating. We staged it in 1985 and again in 1990 when US troops went to the Middle East. Even then our directors explained that Jehoshaphat's weight was a respected symbol of wealth and he led his people in fasting to show they were serious to know God’s will. To ensure this message is clear in today’s weight conscious society, I've included Opt. Dialogue which can be used before "Flat, Flat Jehoshaphat" (Singer's Book pg .15 / Director's Book pg. 25) to emphasize this point.